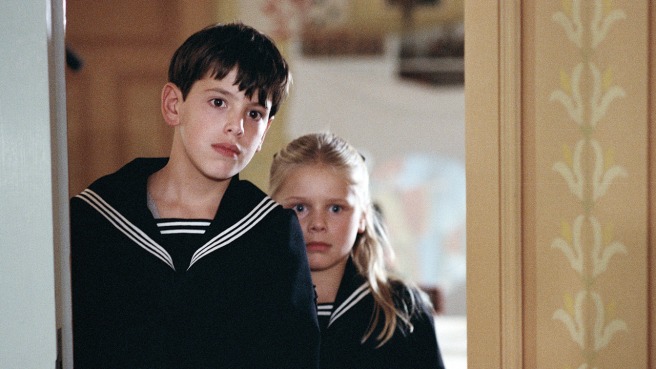 For the tenderfoot cinephile, FANNY AND ALEXANDER (’82) might stand as an indomitable work whose colossal runtime casts an intimidating shadow – 188 minutes in its original theatrical release, 312 minutes as a multi-part TV miniseries (both generously available on FilmStruck with an amplitude of special features). Upon sitting down and watching the film, these perceptions change within minutes, eradicated entirely upon the beguiling tow of the grim reaper’s scythe, witnessed by the young Alexander in prefatory daydream. Where Ingmar Bergman’s earlier miniseries SCENES FROM A MARRIAGE (’73) is as a thicket of barbed wire, a gauntlet to be suffered and survived, FANNY AND ALEXANDER is a filigreed invitation to a jubilant family feast where dark forces gather in-between courses. Brushing up against the merriment are crisscrosses of interfamilial dispute, the palpable threat of impending misfortune, the commingling of phantoms – and yet the atrium that Bergman has erected to receive the vagrant viewer into this world of haunts and wonders could not glow with greater warmth.

It is 1907 in Uppsala, Sweden, and the prosperous Ekdahl family has assembled for the annual series of Christmas commitments, strictly regimented but nonetheless joyous, liberating. Oscar Ekdahl and his wife Emilie (Allan Edwall and Ewa Fröling, respectively) have staged a nativity pageant at the reasonably successful family theater, a bulwark of creative communion where the imaginations of their children Fanny and Alexander have been nourished practically from birth. Scuttle on from there to the Christmas dinner, the film’s festive frontispiece, where we come to know Oskar’s two brothers – the despairing Carl, the philandering Gustav Adolf – as well as their mother Helena. Helena, magisterially incarnated by grand dame of the Swedish stage Gunn Wållgren, is the matriarchal wellspring of the family’s good fortune, a one-time successful actress who has played countless roles both in life and in art (it is no wonder that Ingrid Bergman was originally slated for the role). She has now settled into a grandmotherly equanimity, where comfort and tenacity are equally ensconced. In orbit around her essential goodness, the family and servants happily carouse. Meanwhile, the richest ornamentation abounds — chandeliers glitter, the upholstery blazes a convivial red, candles and clock faces are everywhere adorned. It is a singular fantasia that Bergman conjures here.

Naturally, this decorative world soon plunges into crisis. Bergman alchemizes the archetypal family saga of 19th century literature – fraught with social stations lost and regained, the hovering reality of Europe’s ethnic and religious caste system, and a Shakespearean regard for death and destiny writ large in ancestral blood – with his unflinching eye for psychological anguish and interstitial misery. Yes, the beloved Oskar may perish under the burden of the role of Hamlet’s ghost, to be almost immediately replaced by his punishing Lutheran antithesis, Bishop Edvard Vergérus (played to stone-hearted perfection by Jan Malmsjö) – but who is Bergman to shy away from such durable narrative contrivances? He breathes new life into them, in concert with his formidable cast, dilating familiar scenes of high literary resonance into vaporous mysteries of performance embellished by cinematic subtlety. Every time the camera zooms, a soul is excavated, a demon exorcized, an opaque surface splinters into shards.

It is the tendency of Bergman aficionados to credit FANNY AND ALEXANDER’s greatness to its autobiographical overtones. It paints a pretty picture – Bergman reinventing his past from the perspective of the young Alexander, whose pull towards fantasy and make-believe sets him at odds with the ascetic bishop, who believes the mind should be evacuated of all but the most antiseptic religious virtues. But Bergman’s own comments throw something of a wrench into this interpretation: “It has been suggested…that FANNY AND ALEXANDER portrays my childhood, and that 12-year-old Alexander is my alter-ego. But this is not quite true. FANNY AND ALEXANDER is a story, the chronicle of a middle-class, perhaps upper-middle-class family sticking closely together…There’s a lot of me in the Bishop, rather than in Alexander. He is haunted by his own devils.” This multiplicity of self-representation is part and parcel of Bergman’s mastery, his ability (or compulsion?) to wage war against himself. Alexander’s great throw-down with his stringent stepfather provides the film’s most concentrated locus of dramatic conflict as the inheritor of the Ekdahl theatrical imagination locks eyes with the walking repudiation of artifice, the anemic embodiment of flagellating guilt. Bergman himself mans both sides of the chessboard.

FANNY AND ALEXANDER, finally, is one of the great late-career works, an absorption of countless influences into what the director himself rightly deemed a “huge tapestry filled with masses of color and people, houses and forests, mysterious haunts of caves and grottoes, secrets and night skies.” When Fanny and Alexander are finally rescued by the Jewish antique dealer Isak Jacobi – Helena’s constant but covert lover – they enter a world of occult mysticism, where all questions of thematic exegesis instantly incinerate. This is cinema pitched at the most rarefied hypnotic frequency, and Bergman is to be forever commended for holding the note.