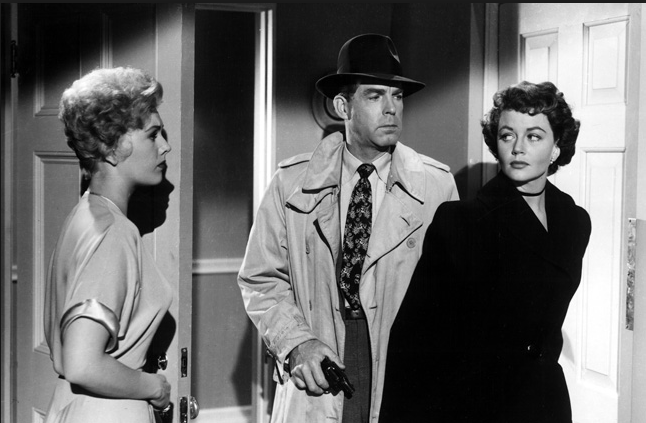 In DOUBLE INDEMNITY (’44), it is not the threat of jail or death that so staggers Walter Neff when the bottom has finally dropped from under him, but the inevitable reprimand of Barton Keyes, the colleague who is less an angel on Neff’s shoulder than he is the waddling embodiment of competence and professionalism and the slim virtues of unrewarding work, the fast-talking insurance veteran caffeinated by conscience (that Little Man) and needled by nerves. That Keyes, who has spent a thankless career sniffing out criminal deception and suspecting the worst in everyone, still maintains an unconditional trust in his associate is the story’s real tragic springboard. It casts a pall over the sexy, vacuum-sealed amorality in which Fred MacMurray and Barbara Stanwyck determinedly toil. For Keyes, we suspect, is on his last leg of innocence – for lack of a better word – and what is truly criminal in Walter’s actions is to have dashed it out from under him, this man who was already so disillusioned, and yet must shed his last remnants of faith in humankind like so much shriveling cigarette paper.

Without the character of Keyes, and without Edward G. Robinson to give him unglamorous life, DOUBLE INDEMNITY would be a story of one man’s moral descent without any sense of the landing from which he haplessly took the plunge. Keyes is the marker of Walter’s debasement. Without his squat workaday consternation by which to measure Walter’s accumulating transgressions, there would be no loss or tragedy in the insurance salesman’s fall. For there was never an uncorrupted Walter Neff – at least not that the audience gets to see. From that first gander at Stanwyck’s ankles, we know his fate is sealed. But without a Barton Keyes, without a surrogate for us law-abiding mortals in the audience to bear crushing witness to it, we would only have morbid titillation to enthrall us, but little reason to actually care.

PUSHOVER (’54) finds Fred MacMurray in similar straits ten years later. But it’s a different kind of noir. DOUBLE INDEMNITY was James M. Cain embellished by Paramount – California as a ground-zero of rootlessness and cultural counterfeit, every desperate American’s final frontier for starting a new life under threat of a gun or a false woman’s enchantments, with Hollywood’s highest production values to breathe artificial life into all the tawdry yet treacherous temptation. But for the Columbia noir of 1954, post-war malaise is a given. The audience is no longer shocked that a protagonist might give in to forbidden desires, might rub shoulders with darkness, or else resort to sordid means to achieve self-enriching ends. If MacMurray fell for Stanwyck out of unvarnished lust, he falls for Kim Novak – gentler than Stanwyck, here a misled or mixed-up gangster’s moll – out of something like love. And he wants “the money” for a more practical reason than is ever given in Double Indemnity – because he is unhappy and underpaid and, almost like Keyes, has been disillusioned past his breaking point.

When MacMurray first meets Novak, he’s all smiles and jocularity (like Dick Powell, MacMurray could play dull-witted dope and world-weary cynic with equal conviction). It is only after taking leave of her that his gait begins to sag under the weight of his bitterness, that his trench coat seems a haggard second skin. He’s Paul Sheridan, a cop who no longer seems to believe in what he’s doing, and Novak, as the vulnerable and enticing Lona McLane, might be his way out of the drudgery. Every halfway seasoned spectator knows that danger lies in waiting, that things will get worse before they get better, if they get better (and they won’t). But Paul is no dummy, and in the romantic scenes between him and Lona the usual omens of fatalism are nowhere hovering. Lona is barely even a femme fatale. She’s as tangibly human as he is, and aside from helping him to hatch the fateful plot that sinks him, she has nothing more malevolent up her sleeve. The only thing that truly implicates her in any kind of criminality, according to Hollywood convention, is her brazen sensuality. If not for the bravura bank robbery sequence that opens the film, one might forget they are watching a crime drama up to a point – this particular conjuring of taboo love, right down to the swooning score, is much closer to the provinces of romantic melodrama.

But it isn’t long before Paul and his associates are on stakeout duty, in an empty room across the street from Lona’s apartment – they are hoping to draw out her hood boyfriend. There’s a lot of waiting to go around, a lot of changing of the guard, and it falls to Paul and Lona to carry out their plan while hiding in plain sight: Lona’s every move is being scrutinized, but Paul can make sure as best he can that he’s the one doing the scrutinizing while his partners are busy sniffing at loose ends. I would guess that it’s close to halfway through the film that time ceases to leap forward and everything comes down to the here and now. Over the span of a single night, Paul executes his plan and then botches it horribly – the clockwork logistics of who is stationed where and who is keeping tabs on whom start to go haywire and all the interlocking gears systematically fall out of place. Director Richard Quine works wonders such whirligig plotting – so much simultaneous action, but only one place to mount the camera at a time. The officers’ base of operations across the street serves as a den of omniscience, in which Paul can monitor Lona’s apartment complex and the surrounding block while also making and receiving calls to and from the various colleagues he’s giving the runaround. It’s a juggling act of multiple informational inputs that Quine puts across with remarkable clarity. But the scheme grows too sprawling and complicated to be maintained from one room; soon Paul is out in the streets, and the proverbial noose is around his neck.

By the time Paul bites the bullet, he ends up having killed quite a number of people. We knew things were going to get bad, but we never expected to see a man spiritually disintegrate in real time. Double Indemnity was about a man whose spirit had already disintegrated – he was rotten from the start and only needed someone with whom to consummate his rottenness (and yet another, Keyes, to render a judgment on it). But Pushover is less clear-cut in its moral delineations; the supercharged fatalism, the shadowy menace is nowhere to be found in Quine’s film as it is in Wilder’s. The darkness that erupted in expressive hysteria in 40s noir is now standard, baked into the environment, and everyone has to some degree partaken of it. For example,  Paul is not the only compromised officer on site – there is Paddy Dolan (Allen Nourse) who lets his drinking problem get the better of him while on the job, and there is Rick McAllister (Phillip Carey), whose wandering eye settles on the apartment next-door to Lona’s, in which a nurse played by Dorothy Malone puts on a show of domestic busywork that steals Rick’s heart with its wholesomeness (theirs is the whitebread American romance to redeem the movie’s sordidness, but the filmmakers wisely refrain from insisting on this point).

Ultimately, a movie like PUSHOVER assumes that just about everyone is in some way disgruntled and prone to criminal error, that we’re all one part Walter Neff on the verge of sinning and another part Barton Keyes holding ourselves accountable, that there is no such thing as pure evil, only pure folly. At some point, Paul crossed a line, but it was in a flurry of desperation on a night of accelerated chaos and who’s to say exactly where it lay? It’s of no importance – none of the other characters, not even Novak’s, have crossed it, no matter what dreams or aspirations haunt their unfulfilling lives, no matter how much of that morally fraught distance they themselves have already run. When everything fouled up for Walter Neff, it was as if he had already come to terms with it – all that was waiting was for Keyes to follow suit. But Paul Sheridan only realizes at death’s door just what a mess he’s made of everything, all dazed regret and guilt and disappointment. He looks to Lona and he looks to Rick and he looks to the lieutenant. They understand, perhaps better than he does, with their wilted expressions of compromised empathy; the letdown is palpable, the disappointment gutting.